On July 4th 2017, Brother Caiden Nordin was involved in a serious accident while working in a rail yard in Edmonton, Alberta. This tragic accident resulted in Caiden losing a limb.

“It is time for us to demonstrate our solidarity and fraternal spirit and I encourage every division to contribute.” Raymond Donegan - General Chairman

Division 796 in Edmonton has set up a GoFundMe page to help the Nordin's in thier time of need. https://www.gofundme.com/help-caiden-recover

The CTY GCA West has put out a circular to all Divisions asking for support.

“It is time for us to demonstrate our solidarity and fraternal spirit and I encourage every division to contribute.” Raymond Donegan - General Chairman. 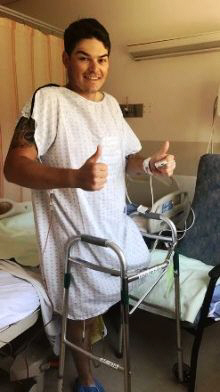 On behalf of Division 796 in Edmonton, the Teamsters Canada Rail Conference is asking all of our members show solidarity by reaching out to help Brother Nordin and his family in any way you can.

Friday, July 7th, 12pm: We've had quite the roller coaster ride these last 24 hours. Caiden was moved from the Intensive Care Unit into orthopaedics yesterday around midday, which meant he was taken off of his monitors. We had a set back later in the afternoon as the build up of narcotics in his system became too great for him to handle. Seconds felt like hours and things were almost as scary as they could get. He was soon stabilized which also meant all of the pain killers were flushed out of his system.

Once everything was calmed down he was able to have a bite to eat and the sense of humour we all know and love was back.

Mom and I went back to the hotel around 11pm only to be woken up by a phone call at 3:30am. Caiden was again reacting to the amount of narcotics in his system and was given another reversal. He was also experiencing some chest pains and blood tests uncovered that his haemoglobin was extremely low. He was then transferred to the observation ward where he could be closely monitored.

Tests have been ongoing all morning to rule out any sort of bleed within his esophagus, as well as any chest problems and CT scans to eliminate other concerning factors.

This picture was taken at 10:30am after a unit of blood perked him up. We are hoping that the roller coaster ride is over and he only progresses from here on.

On behalf of myself, Caiden, mom, Piper and Hudson would like to thank everyone for the flood of love and support we are receiving.