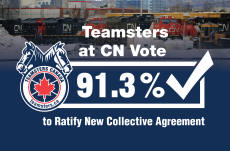 The new contract focuses primarily on safety, specifically with regards to crew fatigue and hours of work. The agreement was reached after an 8-day strike in November last year.

“We did not get everything we wanted, but we still succeeded in reaching a fair agreement which will keep the trains running while improving rail safety. That’s good news for our members, the company and all Canadians,” said the national president of Teamsters Canada, François Laporte.

“We’ve succeeded in getting CN to adjust some of its practices in the interests of safety. But the core problem of fatigue in the rail industry can only be resolved through government regulations,” added the president of the TCRC, Lyndon Isaak. “The issue of fatigue is still far from resolved.”

Key points from the new contract

During bargaining, the company sought to strip the collective agreement of its rest provisions while increasing the workload on conductors. The union prevented this from occurring.

The company has agreed to a number of changes relating to workplace safety. Of critical interest are the improvements made to provisions covering rest and fatigue.

CN does not recognize rest as a regulatory or safety issue. As such, when exhausted workers ask to be relieved after working beyond the 10-hour limit set out in the collective agreement, the company would previously tell workers to “do the work now and file a grievance later” if they were unhappy. Under the new agreement, the company will waive the “work-now-grieve-later” policy when fatigued employees seek to book rest and be relieved, meaning they would not be compelled to continue working.

Under the new agreement, to further dissuade the company from violating the rest provisions set out in the collective agreement, workers will receive extra compensation when forced to work 30 and 60 minutes into their rest periods, including train staff and those at railyards.

The agreement sets out shifts as starting and ending at the employee’s locker facility, or another agreed location, in order to clarify when workers are on paid time. Previously, the company would count trips to employee locker facilities as off-duty time, significantly reducing time available to sleep. Trips to the locker facility can sometimes take hours, and federal work/rest rules mandate as little 6 to 8 hours off-duty time between shifts.

Other, non-safety related changes to the agreement include an industry-standard 8% wage increase over the course of the 3-year agreement (2.5% / 2.5% / 3%), retroactive to July 23, 2019. Workers will also receive a taxable $1000 ratification bonus. The health and welfare plan also saw a series of improvements.

The union was not able to eliminate the lifetime cap health and welfare payouts, instead convincing the company to lift the cap from $60,000 to $75,000. Unless the federal government implements a universal pharmacare program, this issue will likely come up again in the next round of bargaining.

The new collective agreement will expire on July 22, 2022.

Teamsters would like to once again thank Prime Minister Justin Trudeau for respecting workers’ right to strike. The union would also like to acknowledge Labour Minister Filomena Tassi, Transport Minister Marc Garneau, and the Federal Mediation and Conciliation Service (FMCS). They were instrumental in helping parties reach an agreement.

“Ottawa used to routinely violate workers’ right to strike in the rail sector. But this government remained calm and focused on helping parties reach an agreement, and it worked,” said François Laporte.

Teamsters represent close to 125,000 workers in Canada in all industries, including over 16,000 in the rail sector. The International Brotherhood of Teamsters, with which Teamsters Canada is affiliated, has 1.4 million members in North America.