CN Not Doing Enough to Mitigate COVID-19 Risks for Workers 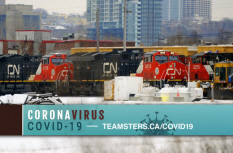 Union officials are being overwhelmed with complaints from their members that adequate precautions are not being taken to protect the workers from the spread of COVID-19. The union is deeply concerned for the health, safety and well-being of front-line workers and action must be taken now.

Many Teamster representatives have approached CN on different levels to express anxiety with the lack of precautions with regards to the virus and to share ideas of how to mitigate the spread of coronavirus between the workers. There are four main areas of concern:

Workstations and locomotives lack proper cleaning supplies in most locations. CN maintains that two alcohol infused “wet naps,” the size of a moist towelette you would find at a fast food restaurant, is adequate to safely sanitize a locomotive.

“What CN is suggesting would be the equivalent of cleaning your car with a Q-tip,” said the president of the TCRC, Lyndon Isaak.

Many bunkhouses are being utilized to capacity, some of these facilities contain communal kitchens, washrooms and common rooms making social distancing almost impossible. While other rail carriers in Canada have committed to work with the union by ensuring sanitation supplies are available, vastly reducing bunkhouse occupancy and the posting of Health Canada guidelines, CN continues to operate as though it’s business as usual.

“The perception of the TCRC and its members is that CN’s focus is train delay and profits over the health and safety of workers,” explained Isaak. “CN risks losing members of its workforce if they don’t change their priorities immediately.”

Railroaders are essential workers who perform safety‑critical duties and form a critical part of the supply chain. They need to be protected and confident that all precautions are being taken so they can focus on their duties without the distraction of worrying about their exposure to this deadly virus.