July 14th, 2020 - Brother Bill Pitts recently made his final run! Bill began working at CP 34 years ago and for 22 of those years he served the members of Teamsters Canada Rail Conference. His official date of pension is September 1, 2020. 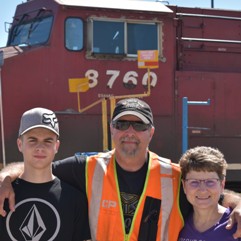 His union involvement began at the division level where he took on the role of Vice Local Chairman, he went on to become the CTY Local Chairman and Vice General Chairman CTY West. His extensive union resume also includes Recording Secretary for the National Office, the CTY West Locomotive Cab Committee and the CTY West Bunkhouse Committee.

His hard work for the union is both recognized and greatly appreciated! His leadership and friendship will be missed by all of us who were fortunate enough to have worked with him.

On behalf of the Members of the Teamsters Canada Rail Conference, we wish Bill health and happiness moving forward. Enjoy your newly found freedom!

A Message From Bill Pitts

Thank you to my family for putting up with all the crazy hours of work and the thousands of phone calls over the years. My family truly kept me grounded and focused during my career as an employee and as a Union Officer.

Solidarity is key to succeed in this industry, without it you're alone and fragile. Together we are a strong force that is resilient. Stay strong, stay focused and most importantly stay together for the benefit of your future and for those who haven’t been hired yet.