Brothers and Sisters, Some of the families whose loved ones died while working for CN Railway and CP Railway are fighting to reform the corporate policing system. There are live Parliamentary Petitions on TSB and National Inquiry Into Private Railway Police. The Teamsters Canada Rail Conference support both petitions. The goal is to far exceed the minimum number of signatures to send a message to the Government and the other opposition parties that change is belated, popular, and inevitable.

The objective of the two petitions below are as follows: 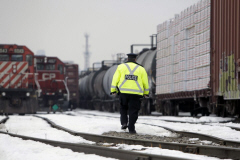 To provide the Transport Safety Board (“TSB”) investigators with whistleblower protections. These protections will free the TSB investigators from the legal ban against reporting to independent police forces when the investigators discover criminal conduct during their incident investigations (Petition submitted to Parliament by Ms. Pamela Fraser).

To request the Government of Canada to establish a National Inquiry into the current private policing regime. The Inquiry will investigate the reasons and impact of Parliament’s decision to enact laws that allow private railway companies to own the police forces which criminally investigate deaths and serious injuries that happen on the companies’ watch. (Petition submitted to Parliament by Mr. Tavengwa Runyowa, Counsel for Ms. Pamela Fraser and other railway families).

How the two petitions above support related efforts to end private railway policing from denying justice to those who are killed or injured on Canada’s railways.

The two petitions above are part of a broader effort to obtain justice and accountability for families that have been denied the right to independent criminal investigations by private railway polices force in Canada. For background, under Sections 44 and 44.1 of the Railway Safety Act, Canada’s private railway companies are allowed to own and control the police forces that have asserted jurisdiction over criminal investigations into deaths and serious injuries that happened on the railways. In many of these deaths or injuries, the railway companies themselves are implicated and may be criminally responsible. This arrangement is a problem because under the criminal law, the employer’s potential liability must be at the forefront of any investigations into such tragedies. However, through their respective private police forces, CN Railway and CP Railway, have criminally investigated and exonerated themselves in hundreds of deaths and serious injuries over the past decades.

Public police forces such as the RCMP have historically claimed that they have no jurisdiction to investigate these incidents or have simply handed over the investigations to the railway companies’ own police forces. The RCMP only opened the criminal investigation into the 2019 Field, BC disaster after media and political pressure, and nearly two years after the incident.

No person or corporation should have the power to criminally investigate themselves. This is especially troubling because TSB investigators are barred from conducting criminal investigations or even assigning fault for any reason. However, they are only persons at the scene of these serious incidents who have the technical expertise to determine fault and who are not paid by the railway companies. This means that the law ties the hands of the very public servants who are best qualified to facilitate justice for victims of railway incidents and to protect the public.

The first Parliamentary petition aims to free TSB investigators to speak out and advance justice and accountability for railway tragedies. The second petition aims to shed light on how Canada ended up with corporations owning the very police forces with the powers to criminally investigate them.

If the efforts to end the railway police succeed, how will the railway companies protect their operations and the public?

Some of the families whose loved ones died while working for CN Railway and CP Railway are fighting to reform the corporate policing system. Their efforts include transforming these railway police forces into private security companies. The companies’ private security personnel will have all necessary powers to protect the railway companies’ operations, but without the public criminal law powers to investigate the very employers who hire, supervise, and can terminate them.

The contract policing model has the additional benefit of freeing the railway companies from the conflict of interest that arises between their duty to enhance shareholder profits and their duty to independently enforce the criminal law in the public interest.

These two petitions, which provide protections for independent criminal investigations as well as a national inquiry into the current private policing scheme, are important steps in supporting the families who have suffered the losses of their loved ones. Your support will help to end the impunity from criminal liability that these private corporations have enjoyed for decades, and ensuring that Canadians do not continue to die on the railways without the right to independent criminal investigations.