Calgary, AB, February 4, 2019 – Three members of the Teamsters Canada Rail Conference (TCRC) have died as a result of a major Canadian Pacific (CP) train derailment. The accident occurred at approximately 1 a.m. Mountain Time between Field, BC and Calgary, AB. 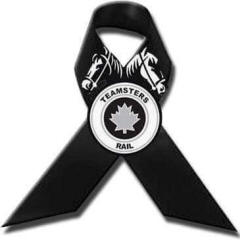 Details are sparse at this stage. Teamsters have learned that the Transportation Safety Board (TSB) has deployed a team of investigators to the crash. The union will cooperate fully with the TSB and CP, monitoring the investigation’s progress closely.

“Our hearts and our deepest condolences go out to the victims’ loved ones and co-workers. Our union and its 125,000 members stand with them in mourning,” said François Laporte, president of Teamsters Canada.

The three victims are believed to be a locomotive engineer, a conductor, and a conductor trainee. Their names have not yet been released.

Eight railway workers have now died in Canada since November 2017. Investigations into these accidents are still ongoing.

“Today, our focus is on this accident as well as the victims’ friends and families. But moving forward, the government and the rail industry will have to recognize that something is wrong and change is needed. Eight workplace fatalities in a little over a year is not something that should be expected or accepted,” said Lyndon Isaack, President of the TCRC.

Teamsters represent close to 125,000 workers across Canada, including over 16,000 workers in the rail industry. The International Brotherhood of Teamsters, with which Teamsters Canada is affiliated, has 1.4 million members in North America.