Josh K. Elliott, CTVNews.ca: The federal government is preparing to sue U.S.-based Omnitrax over the company’s refusal to pay for much-needed repairs to the only rail line supporting Churchill, Man. 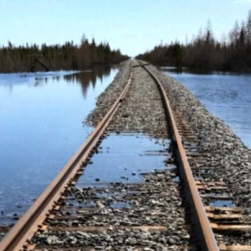 Transport Canada says Omnitrax has failed to meet a 30-day ultimatum to begin repairs on the crucial Hudson Bay Railway line, which serves as the only land route for delivering fuel and supplies to Churchill. The remote community has been without rail service since flooding destroyed its only land link on May 23, sparking fears of a propane shortage through the winter.

Transport Canada says Omnitrax is contractually obligated to conduct repairs and cover costs on the line, while Omnitrax has said it will only conduct the repairs if someone else foots the bill.

The community’s plight has triggered a tense public standoff involving between Omnitrax and all levels of the government.

“Transport Canada is preparing to move ahead with legal action,” the department said in a statement to CTV News on Monday. “Omnitrax has failed to fulfill its obligations under the terms of the 2008 contribution agreement which requires them to operate, maintain and repair the entire Hudson Bay Railway Line in a diligent and timely manner until March 31, 2029.”

The move comes one month after the feds issued an ultimatum to Omnitrax, demanding it move forward with repairs or face an $18.8-million lawsuit.

An Omnitrax spokesperson said Monday that the company has “nothing to report with respect to the federal government lawsuit.”

Omnitrax has blamed the federal government for making the line “not commercially viable,” and has been attempting to sell it off for that reason.

“It has become clear to us that the federal government has no intention of constructively solving this problem for Churchill,” Merv Tweed, president of Omnitrax Canada, said in a statement last month.

The provincial government delivered 2.2 million litres of propane to the community by ship last month to help its 900 residents through the winter. The ship also removed a Via Rail train that was stranded in Churchill after the rail line was disrupted.

Food subsidies have also been increased for the people of Churchill.

A report from the independent engineering firm AECOM estimates it would take 60 days to get the track operational and another 90 days to have it fully repaired.

With files from The Canadian Press