death of a Dawson Creek man 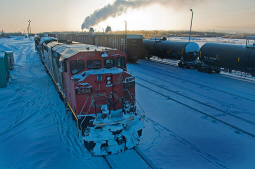 Brian Giesbrecht, a 30-year-old conductor, was killed while working on a railway line north of Fort St. John, when a fuel tanker derailed and rolled over him on Nov. 28, 2012.

Crown prosecutors had argued that a derail sign on the tracks warning Giesbrecht and others about the danger was inadequate, and that the documentation surrounding the warning signs were also not up to standards.

A CN Rail timetable given to Giesbrecht indicated only one derail location on the remote section of railway he was working on late that night, and not the second location further up the line, prosecutors argued.

CN lawyers argued that the company did everything reasonable to ensure the health and safety of Giesbrecht, and that no other workers had complained about the signage prior to the accident.

“We would like to again express our condolences to the family of Bryan Giesbrecht,” CN spokeswoman Kate Fenske said in a statement. “We are reviewing our options.”

The maximum penalty for an offence under the Canadian Labour Code that results in death or serious injury is a $1 million fine.