WINNIPEG, June 9, 2017 /CNW/ - OmniTRAX Inc. (OmniTRAX) announced today that, due to severe flooding and washout conditions, service on the Hudson Bay Railway (HBR) from Amery (28.9 rail miles north east of Gillam, MB) to Churchill has been suspended indefinitely and is not expected to resume operations before the winter season.

A preliminary assessment by an independent Engineering firm, indicates that the track bed has been washed away in 19 locations. Five bridges are visibly damaged and an additional 30 bridges and 600 culverts, structures that allow water to pass under the track, will need to be further assessed for structural integrity.

"The damage is unprecedented and catastrophic," said Peter Touesnard, ‎Chief Commercial Officer at OmniTRAX. "While the Hudson Bay Railway requires significant seasonal maintenance, the extent of the damage 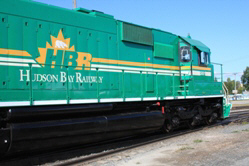 created by flooding this year is by far the worst we have ever seen. The water receded to near normal levels only yesterday, and we hope to have engineers on the ground as soon as possible to conduct a thorough assessment. It will be several weeks before we have a final report of the damage to the line, but we do not expect to be operational before the winter, and are concerned that the future of the track is in jeopardy."

"With the initial assessment, we received from the Engineering consultant today, we made the decision to announce an indefinite service suspension so communities served by the railway can develop long-term plans for the movement of the supplies and resources they need," added Mr. Touesnard.

HBR has been unable to operate to Churchill since May 23rd when high water made the track impassable. HBR is a vital transportation link in northern Manitoba, hauling food, fuel, agricultural products, kraft paper, concentrates and other goods and materials required in the north.

OmniTRAX has notified impacted customers and communities, and it has also been in constant contact with Transport Canada and Manitoba Emergency Measures Organization regarding the condition of the line. In addition, OmniTRAX has been in regular contact with the Missinippi Rail consortium, with which the company recently signed a memorandum of understanding regarding the potential acquisition of the HBR and other assets by the consortium, and have kept them apprised as to the extent of the damage to the rail line.