From the National Post: OTTAWA — Two labour unions say a Canadian proposal to raise labour standards in the North American Free Trade Agreement is vastly superior to an American text, and they accused the United States of stonewalling progress on the issue.

The Canadian proposal goes much farther

“The U.S. continues to qualify the Canadian labour proposal as non-substantive, not serious. That means they have not shared it with their U.S.-cleared advisers,” said Christopher Monette, spokesman for Teamsters Canada.

Representatives from Teamsters Canada and Unifor said Tuesday the proposed U.S. text on labour standards was nothing more than a cut and paste of the failed 12-country Trans-Pacific Partnership — one that labour unions had already rejected as inadequate.

Both unions said they consulted with American negotiators, whom they described as dismissive of the Canadian initiative at the bargaining table.

They also met with Mexican officials to express their concern over poor working conditions and low wages in that country, and were rebuffed there too. 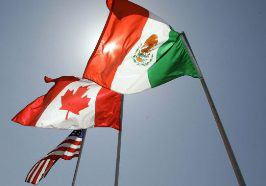 “The U.S. continues to qualify the Canadian labour proposal as non-substantive, not serious. That means they have not shared it with their U.S.-cleared advisers,” said Christopher Monette, spokesman for Teamsters Canada.

Canada and the U.S. have brought labour texts to the bargaining table, but Mexico has not, said Monette.

The U.S. has shared its text with Teamsters officials the U.S. and they describe it as “inadequate,” he said.

The Canadian proposal goes much farther and addresses right-to-work laws in more than two dozen U.S. states that give American workers the right to refuse to join a union but still reap the benefits of a unionized workplace.

Canada wants enforceable, progressive labour standards to be included in a rewritten NAFTA that would force Mexico to pay workers higher wages and do away with so-called “yellow” unions that represent employers rather than employees.

Canada and the U.S. are both concerned about the exodus to Mexico of quality jobs and investment, particularly in the automotive sector, where the minimum wage is less than $1 per hour.

“Twenty-three years ago the argument was this would allow the standard of living for Mexican workers to rise, and here we are 23 years later and we still see minimum wage at 65 cents an hour,” said Jerry Dias, the president of Unifor.

Teamsters and Unifor officials have backed the Canadian position in their meetings with the U.S. and Mexico.

“I don’t think the Canadian team is thrilled with it (the American text) because it falls short,” said Dias.

“I know that the labour movement in the United States that was trying to push the American team to do the right thing put forth progressive language â¦ and they didn’t do that.”

Monette described the Mexicans as unreceptive to the Teamsters entries. “We got the sense the Mexicans are facing a strong pushback from their own business community regarding the Canadian labour proposals, which is unfortunate.”

Dias said Canada should walk away from the NAFTA renegotiation if it can’t make progress on labour because low standards in Mexico have led to the shuttering of auto plants in Canada and the U.S.

“You can’t sign a free trade deal where you’ve already lost half a million manufacturing jobs. The United States has lost a heck of a lot more than that. It’s clear where the industry is investing — it’s crystal clear.”

The labour unrest comes as Foreign Affairs Minister Chrystia Freeland welcomes her Mexican and American counterparts to Ottawa Tuesday, as Round 3 of the NAFTA renegotiation enters its final day.

Freeland is hosting U.S. Trade Representative Robert Lighthizer and Mexican Economy Minister ldefonso Guajardo for a dinner meeting Tuesday night on the eve of the final day of talks in the national capital.

The third of seven planned rounds ends Wednesday with the goal of finishing by the end of the year becoming more elusive by the hour.

Freeland, Lighthizer and Guajardo hold a series of meetings Wednesday, but the major issues will be pushed forward into a fourth round in the coming weeks.

In addition to the disagreement over labour standards, Canada’s chief negotiator has said he doesn’t expect progress several other on hot topics.

They include the investor state dispute settlement process, the fate of Canada’s supply-managed dairy and poultry industry, and the U.S. demand for increase American content in North American-manufactured automobiles.

Canada and the U.S. have also been forced to fend off accusations that they are deliberately dragging their feet at the talks.