no words to express our sadness 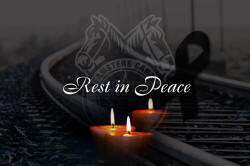 “There are no words to express our sadness with the loss of a member of our railroad family” said Lyndon Isaak, president of the Teamsters Canada Rail Conference. “Our sincerest condolences go out to the victim’s family, friends and co-workers.”

The victim was performing “switching operations” at the time of the accident, a term that refers to activities like making up and marshalling trains, interchanging rail cars, and other related activities.

Few other details are known at this time. The union will cooperate fully with the investigation.