In Memory of Brother Casavant

Sadly, on March 14, 2017, Brother David Casavant passed away at the age of 58 years. His contributions were countless and he is sorely missed by those who were fortunate enough to have known him. On July 17, 2017 Brother Casavant's efforts were honoured by Division 796 in Edmonton.

Brother Casavant retired from CN in 2013 after 37 years of service. He spent many of those years overseeing on the job training (OJT) of newly hired Conductors and he was one of the original Belt Pack Trainers in the 90's.

Those who were trained by Dave benefited greatly from his experience and approach. He has left a legacy of good railroaders is remembered fondly by everyone that he trained.

In recognition of Dave's efforts his family and friends were presented with a plaque that is now hanging at the Bissel Yard office in Edmonton in appreciation his contributions. 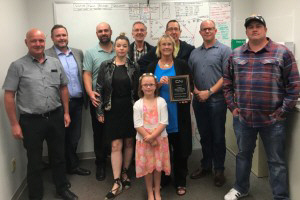 From left to right: 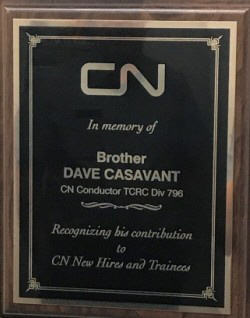 On July 17, 2017 a plaque was presented to Dave's family and is now hanging at the Bissel Yard office in Edmonton to recognize Brother Casavant contribution.