Laval – March 16, 2022 – Canadian Pacific (CP) have served the Teamsters Canada Rail Conference (TCRC) with notice of lockout. In the event there is not a negotiated settlement between the parties, CP will lockout the Union on March 20, 2022 at 0001 a.m. 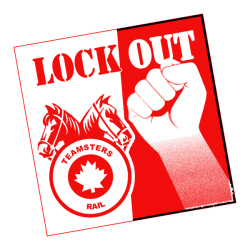 “It was well known that CP was going to force a work stoppage and lockout our members. They have done just that,” said Dave Fulton, spokesperson for TCRC. “At the bargaining table, CP continues to dismiss our members’ demands and are unwilling to negotiate the issues they have created.  We remain committed to reaching an acceptable agreement that addresses our members issues. Our members are fully engaged and will be ready in the event CP carries out the notice.”

Teamsters Canada Rail Conference is committed to working with federal mediators and reaching a negotiated settlement. The Union is willing to remain at the bargaining table until the March 20th lockout deadline and beyond.

The key issues include wages, benefits, pensions and work rules.