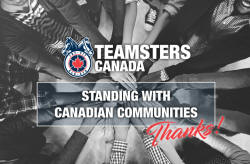 Being a Teamster is about more than negotiating collective agreements and taking care of grievances. It’s also about building up our communities and lending a hand to those in need. That’s why we’re proud to support United Way.

Teamsters Canada is a recipient of the 2018 “Thanks a Million” award. This recognition is given to organizations whose members raise over $1 million in support of the community work carried out by United Way.

Check out the letter we received from United Way. You can the original (in French) here. The translation has been posted below.

We are pleased to recognize Teamsters Canada as a recipient of the 2018 “Thanks a Million” award. This recognition is given to organizations whose members raise over $1 million in support of the community work carried out by United Way Centraide. Every year, this award is bestowed on Canada’s largest corporations and labour unions, on behalf of all United Way Centraide offices across the country.

Please express our heartfelt gratitude to Teamsters Canada members. Their truly generous impulse allows us to invest wisely in improving people’s quality of life and building communities that are good places for everyone to live.

Your generous support will be highlighted starting on June 25, 2019, on the national United Way Centraide Canada web site (unitedway.ca). As well, the full list of “Thanks a Million” award recipients will be published across Canada in the Globe and Mail, the National Post, and Les Affaires.

Your organization’s leadership is exemplary. Your support brings us closer every day to realizing our vision of a community where every individual can reach their full potential.

Rest assured that your sustained contribution is greatly appreciated.